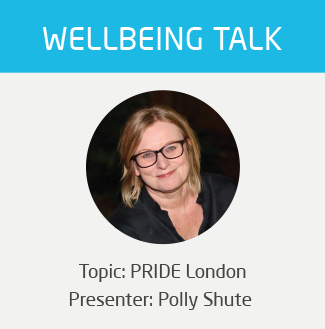 Every year in June, people come together to celebrate the LGBTQ+ (Lesbian, Gay, Bisexual, Transgender, Queer, and Other) community. It’s a time for the community to come together and fight for their rights. Pride Month was first introduced to commemorate the 1969 Stonewall Riots, which were sparked by a police raid on a gay bar in Greenwich Viall, New York City. It was a pivotal moment in the LGBTQ+ rights movement and was the beginning of the fight for equality. This year will be the 52nd anniversary of the first Pride parade in 1970.

Why does the rainbow represent the PRIDE community?
Sexuality and discrimination in the work place
Homophobia has many negative impacts on LGBTQ+ people
How to support a friend or colleague who is 'coming out'

Why does the rainbow represent the PRIDE community?

A commonly recognised symbol, the rainbow flag was created by artist Gilbert Barker in 1978. Each colour has a different meaning. Red is symbolic of life, orange is symbolic of healing, yellow is sunshine, green is nature, blue represents harmony and purple is spirit. If hot pink is in the version of the flag, it represents sex, turquoise represents magic/art and light blue and pink are the colours of the trans pride flag.

Sexuality and discrimination in the work place

Pride is all about being proud of who you are, no matter who you love. Sexual orientation discrimination and gender reassignment discrimination are both illegal in the UK as they are protected characteristics in the Equality Act 2010.

Stonewall defines sexual orientation as ‘a person’s emotional, romantic and/or sexual attraction to another person’. Discrimination arises when someone is treated less favourably because of this. According to CIPD, LGBTQ+ workers experience higher levels of conflict at work compared to heterosexual employees. Often, incidents of discrimination in the workplace are not resolved, even when reported. This results in poor quality of life and lower job satisfaction. It’s important that companies create an inclusive environment to remove unfair discrimination and bias. A company could consider educational training days to raise awareness, or host awareness and communication events and fundraisers. Although we have seen a huge shift in this in recent years, there’s still a long way to go.

Homophobia has many negative impacts on LGBTQ+ people

Homophobia is an irrational dislike of or prejudices against people who are in the LGBTQ+ community from others who are in fear or uncomfortable with certain identities. Homophobia can take many different forms, including negative attitudes and beliefs about bisexual, lesbian, and gay people. This could be from deep-rooted religious beliefs or it may be something that they’ve learned from parents or families, this does not make it acceptable and is similar to being racist.

Homophobia has many negative impacts on LGBTQ+ people and can significantly reduce their positive mental health. It can have effects on their physical health, create stress and trauma, and increase the risk of suicide. As we know, suicide rates are prevalent across our industry and among young people. By becoming an ally of the LGBTQ+ community, you’ll be advocating equality and increasing quality of life.

How to support a friend or colleague who is 'coming out'

Coming out refers to the process that people who are LGTQ+ go through as they work to accept their sexual orientation or gender identity and share that identity openly with other people. It’s a very brave thing to do and it’s extremely personal and different for everyone. Someone’s emotions when coming out may range from scary and anxious to elated and relieved. Everyone’s experience is different, and it can be a very difficult time for an individual, leaving them feeling ashamed, isolated, and afraid.

If a friend or colleague comes to you it means that they feel close to you and trust you significantly and there are lots of factors to consider. Thank them for having the courage to tell you and listen to them. Often people in the LGBTQ+ community don’t feel that they are or have been listened to, especially if they’re at the stage of identifying who they are. Perhaps you already knew, but don’t underestimate how difficult this conversation could have been for the individual. A person identifying their sexuality or gender identification shouldn’t be treated differently from anyone else in the workplace, but it’s so important to show b your support and understand how they’re feeling.

The LGBT foundation is a great resource for support:https://lgbt.foundation/helpline